Send us a picture of your lovable Bulldog, and we’ll create a custom plush stuffed animal that looks just like them. We’ll be sure to take into account every detail on your Bulldog from head to toe (even his plump little belly).

Each Personalized Bulldog Stuffed Animal Is:

Your Bulldog plushie will be so much like your pet Bulldog you won’t be able to tell the difference. Well, minus the surprise burps, snorts, and farts! We’ll leave that to the real thing. 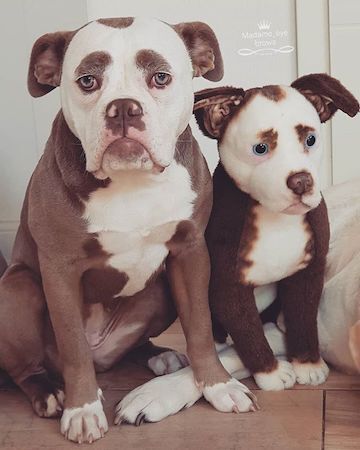 Material: Premium polyester furs and specialty noses and eyes, combined with full airbrushing to capture even the smallest of details.

Turnaround Time: All Petsies are completed and shipped to your home in approximately 6 - 8 weeks. During the holidays, production time is typically longer, but we'll keep you updated! Please note that this is just an estimation, please check out the creation page for the most up to date turnaround time.

How Much Do You Know About Bulldogs?

Originating in the British Isles, the Bulldog is considered to be a mix of a mastiff and a pug. While the English Bulldog is thought of as the breed, there are American as well as French versions of the breed that are also very popular. The Bulldog is recognized as having 10 colors and six markings.

The AKC registered the Bulldog in 1886.

The Bulldog is immediately recognizable as a mascot for schools such as Yale. Here, a show dog named Handsome Dan was made the school’s mascot. Each successor to Handsome Dan bores the same name. The University of Georgia also has a Bulldog as its mascot named Uga.

Bulldogs are also a symbol of the U.S. Marine Corps which started during WWI. These USMC Bulldogs are named Chesty.

Caring For Your Bulldog

Nutrition and Feeding: 1/2 to 2 cups of food daily. Divided into two meals.

Grooming: Easy to groom with a brush or comb. Bathe as necessary. Wipe inside wrinkles of the face frequently.

Health: Prone to having breathing problems. Susceptible to heat and can have eye problems. Bulldogs can also develop tumors, skin infections, and hip and knee problems.

The popularity of Bulldogs is on the rise. They have topped the charts as the 4th most popular dog breed in the U.S., making them an amusing pal to have by your side. From their deep courage to friendly nature, the Bulldog is a great pet to have.

Who doesn't love Bulldogs? They are the gentlest of souls and kinda through and through.